DO GENERATIONAL GROUPS SUCH AS GEN Z EVEN EXIST – OR ARE THEY THE MARKETING EQUIVALENT OF A HOROSCOPE? TO FIND OUT, BBH LABS CREATED THE GROUP COHESION SCORE, A NEW MEASURE TO CALCULATE THE SINGLE-MINDEDNESS OF A GROUP. THE RESULTS, WRITES HARRY GUILD, NOT ONLY CHALLENGE HOW WE VIEW MILLENNIALS, BUT HOW WE VIEW OURSELVES.

Anyone masochistic enough to read several millennial and Gen Z trend reports will encounter the same word again and again: paradox. These generations are made out to be conflicted on almost every issue. They hate social media, they love social media. They don’t believe in brands, but queue for hours outside Supreme. They are the most sceptical generation ever and yet they embrace astrology. For every fact about Gen Z and millennials, there seems to be a corresponding counter-fact.

Fittingly, these reports are both accurate and totally misleading. Gen Z and millennials are full of contradictions – but their contradictions occur at a group level, not an individual one. This distinction has been lost on many marketers. In their reports, it’s the individual, rather than the group, that is simultaneously pessimistic and optimistic, cautious and carefree. Clearly, this is absurd. Just because half the world is female and half male, it doesn’t mean the average person has one testicle.

The truth is that these ‘generations’ are simply random collections of people who share no special connection beyond being born within two decades of each other. For millennials, this is roughly 1980 to 1996; for Gen Z, 1997 to 2013. When Gen Z’s parameters are loose enough to include both Prince George and Lil Pump, is it any wonder that they fail to hold a consistent worldview? 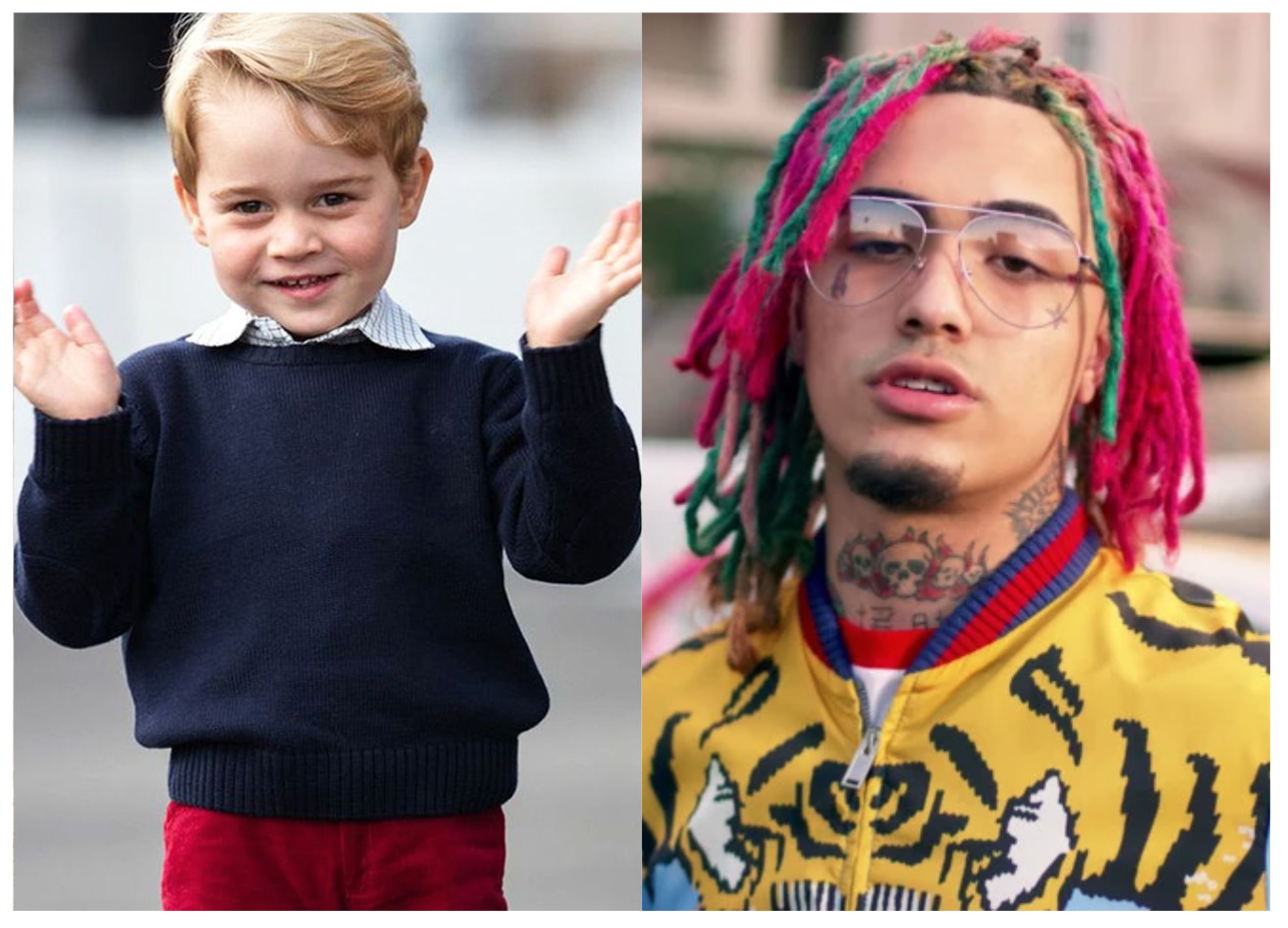 The problem is even more pronounced with millennials. In the UK alone, there are around 78,000 millennials whose children are also millennials (GWI, Q1 2020). When we say ‘millennial’, we’re labelling tens of thousands of children with the same attributes as their parents, whilst identifying the Gen Z kids a year younger than them as being utterly distinct.

The United States is home to 72 million millennials. If America’s millennials declared their independence and founded The Republic of Avocadonia, they would be the 19th largest country in the world. Yet the industry treats them like a single entity. Swap a similar size population group into any headline about US millennials and the ‘insights’ are so sweeping they border on offensive: 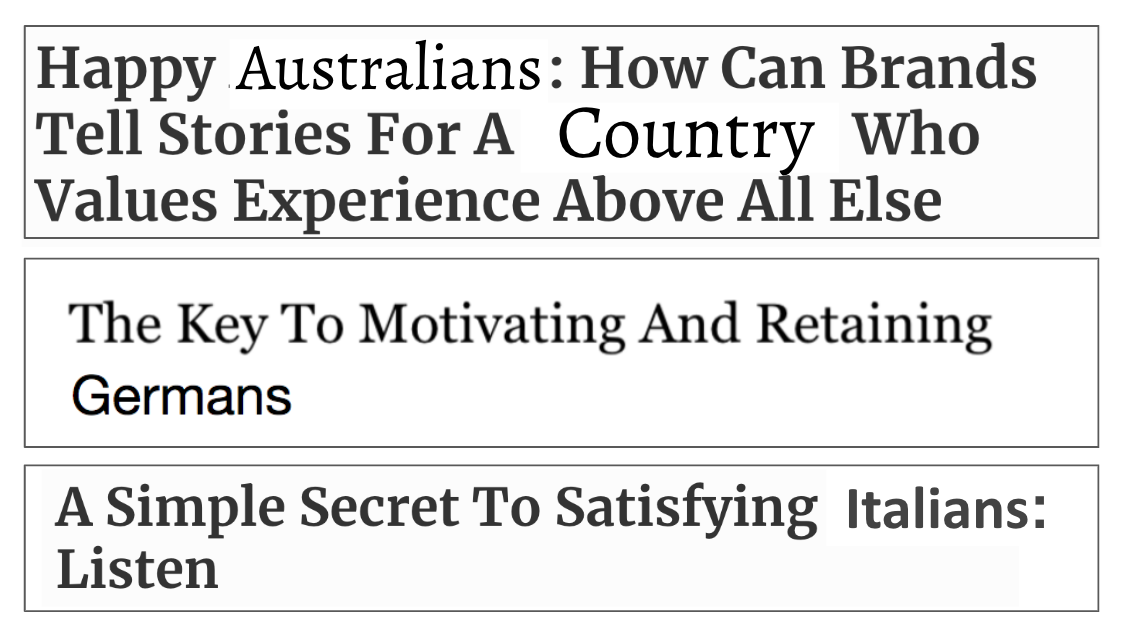 So far, so familiar. This is not the first article to challenge the industry’s obsession with generational groupings. However, we are hopefully bringing something new to the party: the Group Cohesion Score.

The Group Cohesion Score is our attempt at calculating the relative likemindedness of a group of people. Using TGI’s Jan-Dec 2019 UK dataset, we measured the size of the average majority viewpoint across 419 lifestyle statements. These statements range from the mundane (“I use a refillable water bottle most days”) to the profound (“There’s little I can do to change my life”) to the philosophical (“A real man can down several pints in a sitting”). The available responses are Agree, Disagree, Neutral or Not Applicable. These statements will elicit conflicting opinions in every group, but close-knit, homogenous groups (e.g. Mormons) will have larger majorities than weaker ones (e.g. left-handers). You can access the same data yourself through TGI – we haven’t manipulated it in any way.

As an entire populace, the UK’s Group Cohesion Score is 48.7%. In other words, the average majority opinion is held by 48.7% of the population.

Newspaper audiences are a useful way of demonstrating the score. Regular readers of the Financial Times have an average majority opinion of 57% (+8.3 percentage points higher than the UK average). This makes sense given the paper’s subject matter and the socioeconomic factors that unite many of its readers. In liberal echo chambers, much is made of the “typical Mail reader” but the Daily Mail’s readers (+1.6) are actually far less like-minded than those of the Guardian (+5.4). Remarkably, the Sun’s readers have a negative Group Cohesion Score (-2.7). This means that if you locked 100 Sun readers in a room together, they would find more to disagree about than if you repeated the experiment with 100 randomly selected Brits. 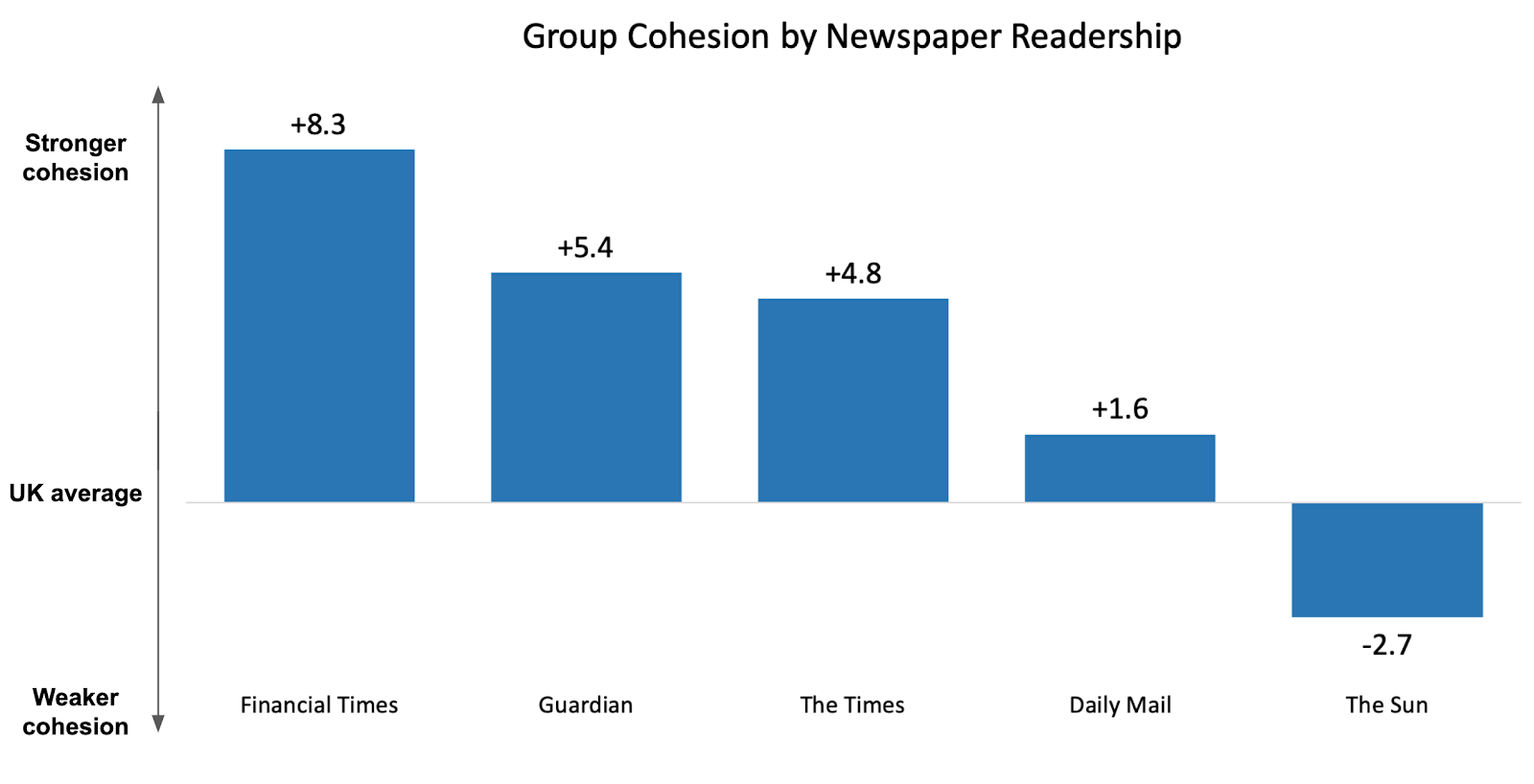 So, how do our generational groups fare? The short answer: not well. On average, the generations have a Group Cohesion Score of +1.3, making them only marginally more like-minded than the nation as a whole. For Gen Z, this score falls to +0.2. People born between 1997 and 2013 have no stronger connection to each other than to the rest of the country. There’s an entire industry built on churning out Gen Z insights and it’s complete bollocks. They have no worldview. The weakness of these generational groupings is laid bare when compared with other ‘communities’.

The data is clear: passions, habits and temperaments unite us, not generational groupings. Understanding consumers through their nut consumption may sound kooky, but it’s no more ridiculous than doing so through a random 16 year birth window. Every year, agencies waste thousands of pounds and hours trying to understand Gen Z and millennials. What if we re-allocated those resources into studying the groups that do provide insight into our consumers’ lives? It’s exciting to picture an industry where we target by temperament, rather than generation. How would you tailor messaging to resonate with an optimist? What media placements would you buy for an introvert (posters above EXIT signs, perhaps)?

In our search to replace generational groupings, we must be wary of class. If we run the NRS Social Grade System through the score, we can see that though the middle classes (ABC1) are a relatively single-minded entity, those classified as working class (C2DE) have little to unite them. 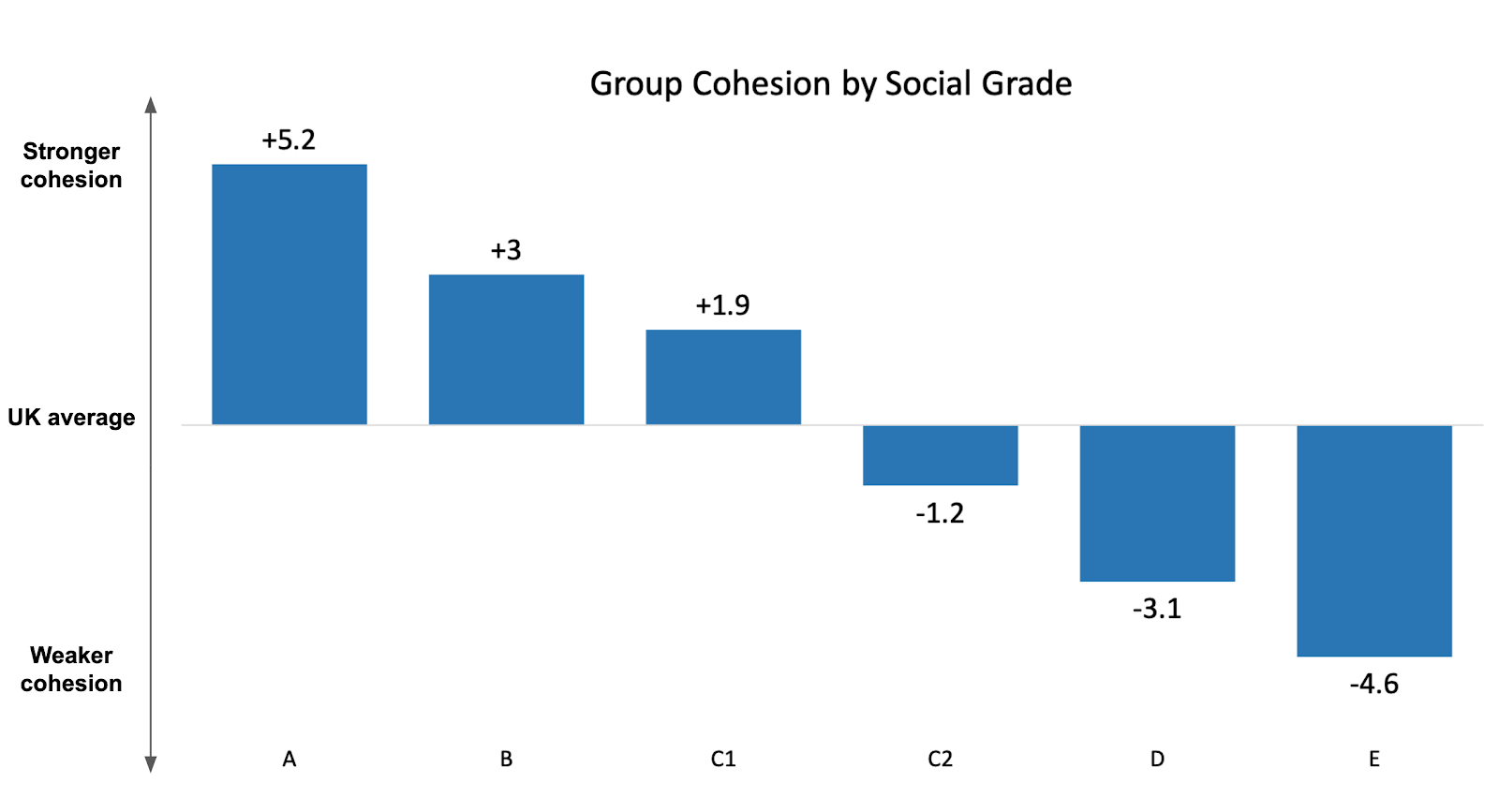 This discordance is even more striking when you consider population size. The ‘middle middle class’ (B) make up 23% of the population but have a Cohesion Score of +3, whereas the ‘semi-skilled and unskilled working class’ (D) make up 15% of the population and yet they score -3.1. The lower social grade has fewer members, but more divisions. I’ll leave the hypotheses to the experts, such as the brilliant Steven Lacey, but it’s clear that any marketer targeting a C2DE grouping should proceed with caution.

Why do we fall prey to these sweeping, often useless groupings? Part of it is laziness. Carrying around a caricature is easy, negotiating the complexities of real, breathing human beings is harder. We reduce people to tropes (millennials = experiences, avocados, purpose) to avoid the real work of understanding them. And whilst these shortcuts can be hidden in pretty decks, there’s no disguising them in the work.

But perhaps it is also a symptom of our own sameyness. Looking at cohesion by profession, Marketing is by far the most like-minded industry that TGI measures.

This is advertising’s biggest problem in a single chart. This is the monoculture. How can we possibly understand, represent and sell to an entire country when we exist in such a bubble? We like to style ourselves as free thinkers, mavericks and crazies, but the grim truth is that we’re a more insular profession than farming and boast more conformists than the military. We have become the followers of Brian, shouting “we are all individuals” in mindless unison. No wonder we’re so out of touch. 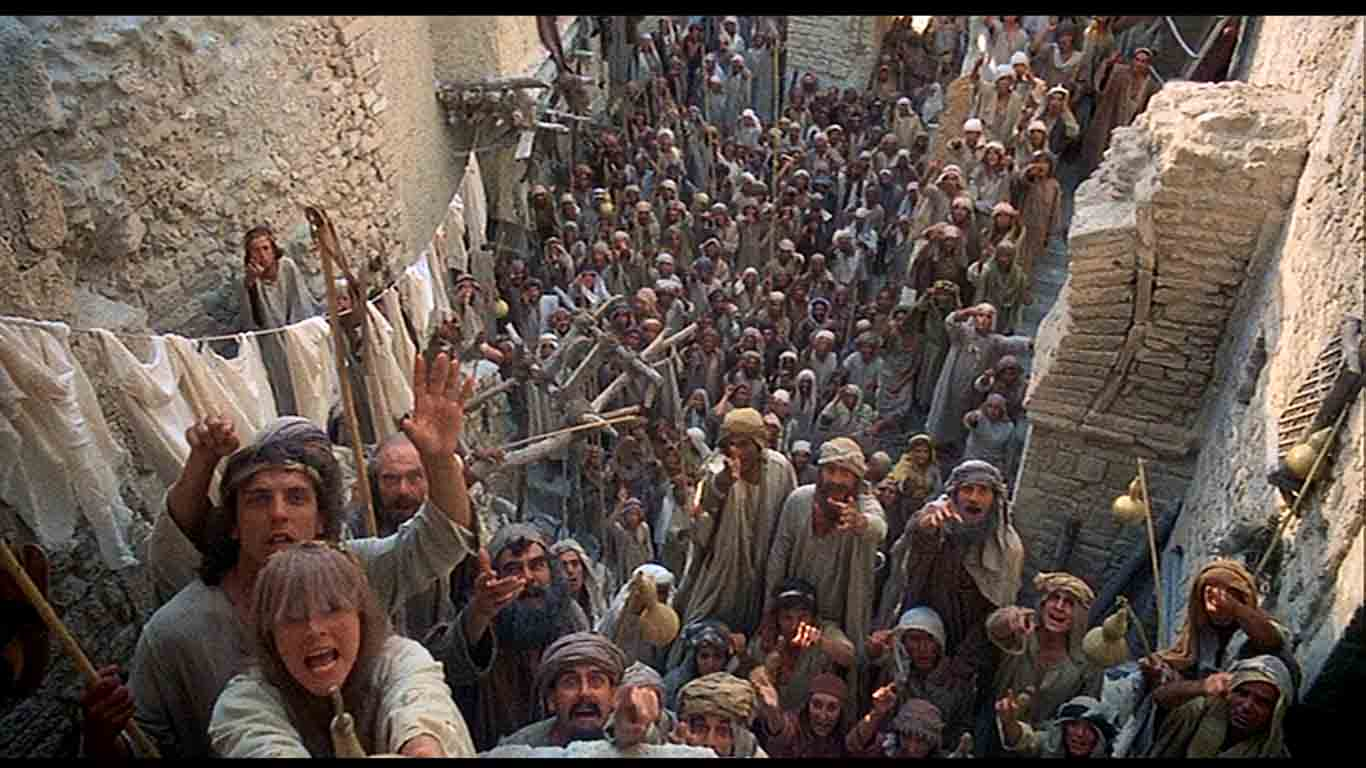 We promised ourselves a new normal when we emerged from this crisis. We talked about a new start. That may not happen, but let’s at least make this one change. Let’s consign our Gen Z and millennial obsession to the past. Let’s actually put in the legwork to understand the daily realities of our consumers’ lives. Let’s grow up and stop playing the generation game.

THE BATTLE BETWEEN ART & THE ALGORITHM

“Everyone is born a genius, but the process of living de-geniuses them”

15 thoughts on “PUNCTURING THE PARADOX: GROUP COHESION AND THE GENERATIONAL MYTH”

when the world zigs, Zag

The latest from labs