About a month ago, we posted an anti-Quora rant. It triggered quite a bit of discussion in the comments, one of which was even developed into a counter-post that argued Quora’s superiority in identifying intent over search engines. To round off the impromptu series, we’ve asked Shannon Bain to explain why it isn’t about Quora’s value or lack thereof. Below he explains that there’s a design tension at the heart of all this discussion about the Q&A platform we love to love and hate in equal measure.

Quora is still getting a lot of press, both positive and negative, much of it in the form of a debate about its value. Is Quora a good, valuable information service or is it simply a platform for SV self-aggrandizement? As far as I’m concerned, we’ll never get an answer to this question (mainly because it’s actually both). What we should be looking at instead is what the negative reactions tell us about the dangers of designing for social content creation on a platform that’s primarily positioned as a knowledge resource.

Quora is officially “a continually improving collection of questions and answers created, edited, and organized by everyone who uses it”. So it’s a Q&A platform, but a fundamentally social one. This puts Quora in a tricky position because there’s an underlying tension between the product’s official proposition and the activity it must “afford” through its design to be a successful social product.

Quora’s Q&A focus primes knowledge-sharing expectations in users. But a reality of social functionality design is that you must always “afford” user display: give users the domain-appropriate means to show-off, shine, look good, whatever. Display is a powerful and perfectly valid motivator of social activity, even if we like to pretend it’s not. In this case, it incentivizes good questions and smart answers. And since Quora is effectively a community talking to itself (it’s by us pros, for us pros), there’s no way to avoid display even if you (foolishly) wanted to.

So here’s the tension: when we’re primed with strong knowledge-sharing expectations, but are faced with brazen self-promotion instead, we get annoyed–– even when it results in good content and drives a lot of our own activity. The product’s official, expectation-priming proposition is so clearly about altruistic knowledge-sharing, we can’t help but feel weird about the selfish display activity necessarily afforded by the platform.

To understand why, we need to look at the product’s framing, the norms in play, and users’ perceived motivations. A product’s frame is the big interaction type that structures it, guides design and primes user expectations. For Quora, it’s a Question & Answer frame. One way frames work is by embedding norms, the informal rules and conventions coordinating and smoothing our daily activities and interactions. When you hear about a Q&A platform, it’s partially your grasp of the frame’s norms that give you that immediate, high-level understanding of what’s supposed to happen. There are at least two roles (Questioner and Answerer) whose interactions are temporally structured (Qs before As) and whose performances can be judged as appropriate or inappropriate (e.g. did the Answerer actually address the question).

But on a platform essentially dependent on user effort, display is a powerful incentive you can’t ignore. It’s also unavoidable in the product’s strategic “by us, for us” positioning. So, the product necessarily affords transgression of the official Q&A frame’s “no flaunting” norm.

Elsewhere, I’ve argued that in addition to display there are two other big reasons people use social functionality: knowledge and connection. If you think of these as defining a space within which a piece of social functionality can be plotted according to how it mixes the elements, you can visually represent the mismatch between Quora’s “explicit” position and it’s “afforded” position. 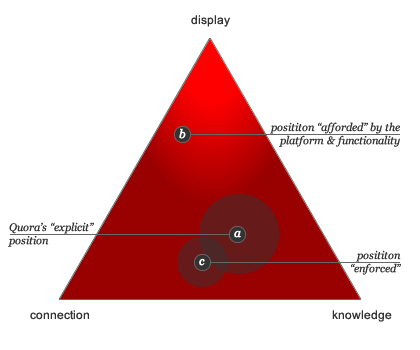 Notice I’ve also included the “enforced” position. This represents the backlash apparently being enacted by some members against transgressions of the no-flaunting norm. My impression is that it’s even stricter and less display-lenient than the official position.

I can think of three approaches to mitigating the mismatch:

The last one gets my vote. Display is necessary for Quora to succeed and is going to happen no matter what. Indeed, as the backlash suggests, product-specific norms for legitimate display are already being negotiated. Why not improve the tools for negotiating, communicating, and enforcing legitimate means of display. For example, beyond the current sanctioning (voting) and elevation of “quality” performances, consider a menu of user-applied content tags – e.g. “flaunting”, “advertisement”, etc. Or socially reward users that review and rehabilitate tagged content, possibly even elevating them via a light status system. There are a lot of design possibilities in this direction. And though there’s a real potential for gamesmanship, it’s still  my favorite option. It’s not about iron hand enforcement of official rules. It’s about giving users the tools to define, enforce and communicate what they collectively decide are the normative bounds of performance on the platform.

THE BATTLE BETWEEN ART & THE ALGORITHM

“Everyone is born a genius, but the process of living de-geniuses them”

when the world zigs, Zag

The latest from labs